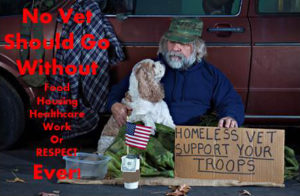 Throughout the United States there are literally dozens of organizations dedicated to providing aid and comfort to our nation’s veterans. One of the largest and oldest of these organizations is ‘American Veterans’ or simply, AMVETS.

Over seventy years ago, as WWII was entering its final push through Europe and the tide was turning in the Pacific, the ranks of returning military veterans began to swell to numbers not seen since the end of the Civil War, some 80 years previous. By war’s end, that number was in the millions and something was desperately needed to help the returning veterans acclimate to a world turned upside down by war. Millions were looking for jobs, many for homes, and many more for both, along with a helping hand navigating the all-to-familiar burdensome bureaucracy in search of help for an array of physical, mental, emotional and financial concerns.

The ‘Old Guard’ was simply too, too old. The veterans of WWII wanted a new voice, a voice for their generation and an organization that was focused on their needs. In response to this call, a group of veterans representing several veteran clubs met in Kansas City, Missouri and founded the ‘American Veterans of WWII’ on 10 Dec 1944. On 23 July 1947, President Harry S. Truman signed Public Law 216, granting a Congressional Charter to AMVETS. Since 1948, veteran volunteers have helped veterans of World War II and subsequent American wars and conflicts obtain the benefits promised them by the federal government, and through the generosity of a grateful citizenry, much, much more.

The Joppatwone Lions Club includes members past and present who have served their Country in time of peace and war and as such, take immense pride in doing what they can to support and assist their fellow veterans and appreciate the efforts of folks from all walks of life who join in that effort.

We would like to invite our community to join the millions of caring, compassionate and grateful citizens across the Country who through a donation time, resources, tangible goods (clothing, furniture and more) or financial contribution, help to make the lives of our veterans and their families that much easier in times of need.

Please take a few minutes to learn more about the AMVETS organization and make a commitment, no matter how small it may be or how often you may choose, to help those in need who have served us so proudly. They deserve it!